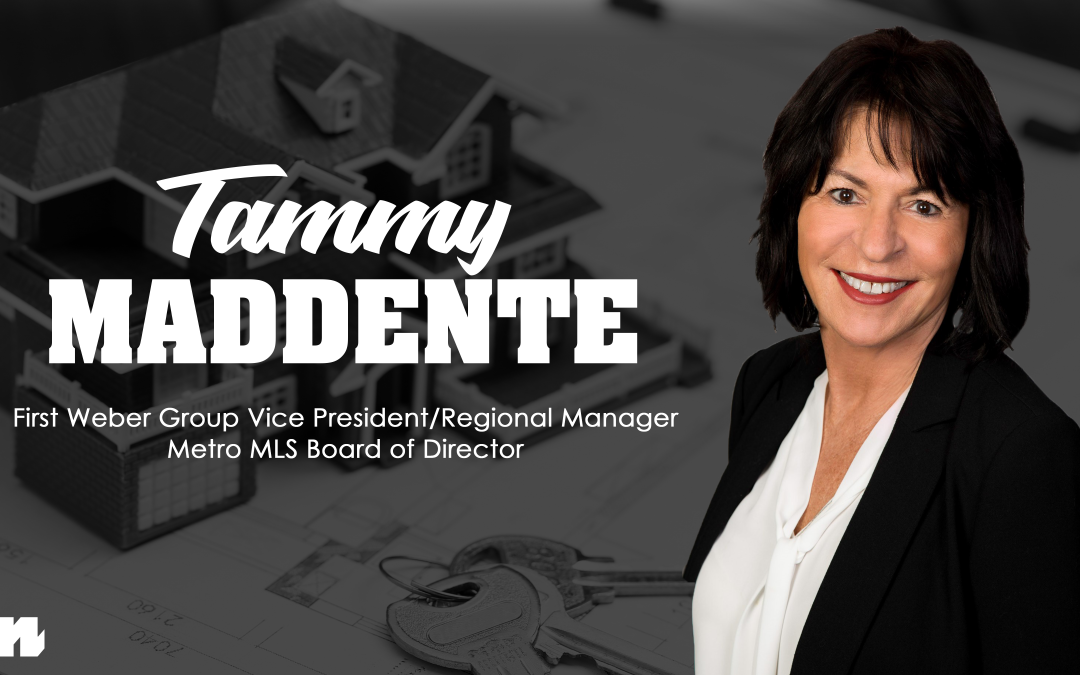 Tammy Maddente is a trailblazer in the Wisconsin real estate industry, as she quickly rose to prominence in the late 1980s.

Her demeanor, knowledge, and work ethic allowed Maddente, who started in real estate in 1986, to promptly experience success.

In the 1990s, Maddente shifted her focus to real estate management in what historically was a male-led industry. She currently serves as First Weber Group’s Vice President and Regional Manager. She credits her willingness to take risks as the reason for her success throughout her career.

“As long as I was authentic, true to myself, and my integrity meter was in check, I was never afraid to say or do what needed to be done,” Maddente said. “I grew up in a man’s world, and that’s not easy to do in this business. You have to work that much harder. I wasn’t afraid to take risks. I would always voice what was on my mind no matter what the consequences were.”

During her career, Maddente has used her platform to push the real estate industry forward, especially when it comes to fair housing. Her experiences personally and professionally drive her to make a positive impact on diversity and inclusion.

She strives to make a difference through her position on the Metro MLS Board of Directors.

She first assumed her position on the Board of Directors after Coldwell Banker Residential Brokerage promoted her to regional vice president in 1999. Her board position has helped her spark change with diversity and inclusion in the industry, she said.

“If I wouldn’t have served on this board for the last 21 years, I don’t know if I would have had this platform,” Maddente said.

Maddente has hired individuals based on their talent, potential, and experience rather than their genetic makeup or background. She believes it is imperative that REALTORS® “mirror the community,” as it gives clients a sense of comfort and confidence when dealing with like-minded individuals.

Her philosophy has led to her overseeing one of the most diverse staffs in Wisconsin and inspired others to follow suit.

Maddente has been active in the community, serving on multiple committees throughout her career. In 2006, she started the First Weber Foundation with the idea of generating fair-housing opportunities and getting into communities to make a lasting impression.

The First Weber Foundation has participated in multiple Habitat for Humanity projects. Maddente recalls the foundation’s first housing construction project. She had different offices sign up for each day of the five-day build and made sure she attended the first day to show the initiative’s significance.

When the team finished on the first day, Maddente wanted to come back. She returned the next two days and noticed a unique occurrence on the third day.

“By the third day on Wednesday, I was driving through the neighborhood in the morning, and I saw people two doors down looking at their porch railing. By the afternoon, I saw them painting that railing,” Maddente said. “This is what happens. This is what happens when communities see how important homeownership is. We want to give dignity back to neighborhoods. When you come in, and someone cares about your neighborhood, that is contagious.”

Maddente also has sought growth at the MLS level.

Metro MLS prides itself on offering transparent and reliable market data to ensure consumers have professional and fair home buying and selling experiences. Metro MLS also provides industry-leading services and cost-effective resources to its over 9,000 REALTORS® in Wisconsin and the surrounding states that enhance fair housing.

Maddente plays a prominent role in leading the direction of Metro MLS and its steps to ensure fair housing. She isn’t afraid to raise questions and seek change to try to progress the real estate industry.

Recently, MLSs and REALTOR® associations have discussed the term “master” and if the terminology should be removed in favor of “primary” or “main” when detailing a bedroom or bathroom. Although the wording is lawful, Maddente said these conversations are necessary due to the sensitivity of the term “master.”

“Tammy is always mindful of the legal requirements and concerns but also the ethical,” Metro MLS CEO Chris Carrillo said. “She embodies the dual approach of using the mind and heart to make good decisions.

“Issues are rarely straightforward, though. Organized real estate is ensuring our industry creates buying and selling opportunities for all. That process and evolution never stop. Tammy’s contribution to this vital conversation continues to improve the real estate community at large.”

Maddente especially wants to improve fair housing in Milwaukee. She has lived in Milwaukee’s North Shore for many years and has conducted extensive business in Milwaukee throughout her career.

The Fair Housing Act of 1968 made racial discrimination in housing transactions illegal. In 1970, Milwaukee’s Black homeownership was 33%. Currently, 27.8% of Black residents are homeowners, according to U.S. Census data.

This data is cause for concern, Maddente said. It also is why she actively participates in committees that strive for change in society and real estate.

This year, she created the IDEA MOVER group, which stands for Inclusion, Diversity, Equality Allies Making Our Voices Empower REALTORS®. This First Weber group consists of energetic real estate professionals who seek change and focus on education, mentorship and fair housing at the company level.

Maddente generated the idea for this group after realizing training sessions didn’t work. She has found direct conversations produce meaningful change and has confidence this strategy will improve diversity and inclusion at the company level, which will directly impact society, she said.

Maddente wants others to remember her for being “instrumental in people’s careers,” she said. She strives for progress and is proud of the impact she has had on the real estate industry regarding fair housing, diversity, and inclusion throughout her career.

Her willingness to provide equal opportunities for everyone, regardless of race, gender, or background, has earned her respect from her industry peers.

“Tammy is the right leader at the right time at the right place,” Carrillo said. “Metro MLS is better as a result of her vision, leadership, and passion. To the extent, I strive to embody those same qualities I have observed in Tammy through these many years.”