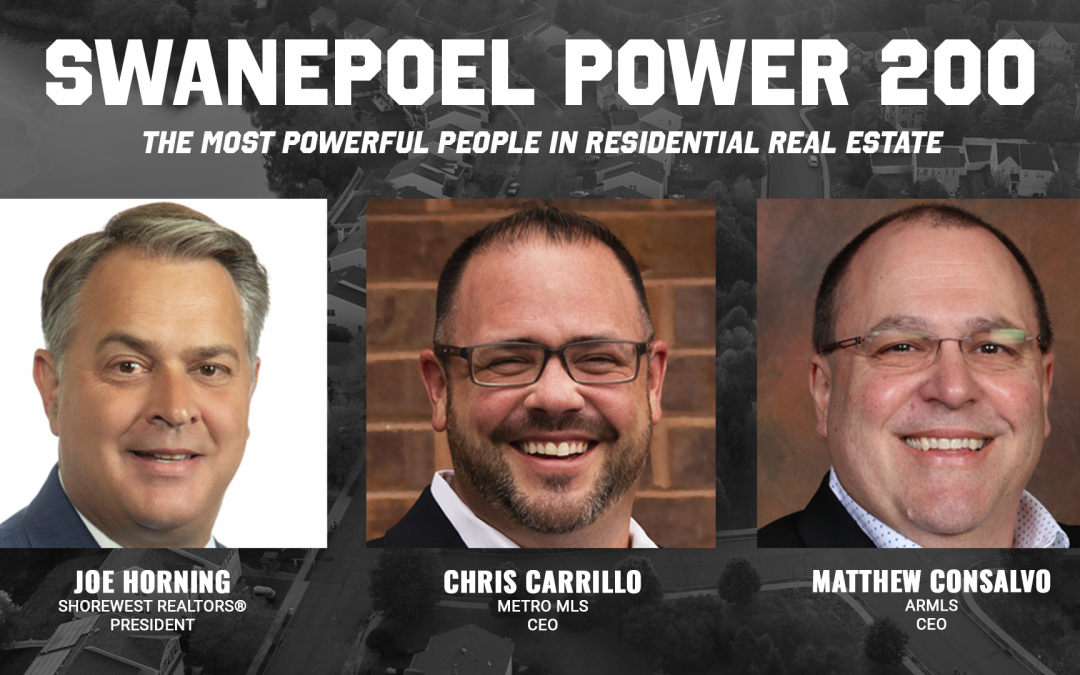 Metro MLS CEO Chris Carrillo, Shorewest REALTORS® President Joe Horning and ARMLS CEO Matthew Consalvo appeared on the 2021 Swanepoel Power 200 list of the most powerful leaders in the residential real estate industry. Out of the 211 people that appeared on the top 200 list, Horning is No. 84, Consalvo No. 126 and Carrillo No. 176.

The three play an instrumental role in leading Metro MLS. Horning serves as the Metro MLS Board of Directors Chairman, while Consalvo is an Outside Director on the Board of Directors. Carrillo and Consalvo formed the corporation MARKT LLC, the industry’s first non-contiguous joint venture, in March 2018.

Metro MLS partners Michael Wurzer, the President and CEO of FBS, and Brad Bjelke, the CEO of UtahRealEstate.com, also made this year’s list. Bjelke, Carrillo and Consalvo are founders of MLS Aligned, a company created to address the data efficiency problems facing MLSs.

The SP200 ranks the top real estate industry professionals in the country based on eight pieces of criteria and features brokers, educators, advisors, tech individuals and media personalities.

“To say I am humbled to be included on a list of leaders that I look to for motivation and affirmation is an understatement,” Carrillo said. “I also want to congratulate all the other leaders mentioned on this list, especially Joe, Matt and Brad. I am thankful to be surrounded by incredible leaders at Metro MLS, MARKT and MLS Aligned. Michael and FBS are great partners of ours, and he is more than deserving of this honor as well.”

Carrillo has served as Metro MLS’s CEO since August 2011. He volunteers in various MLS leadership roles and received the 2019 CMLS Peter Shuttleworth MLS Executive of the Year award.

Horning is a third-generation leader of the 75-year-old family-owned brokerage, Shorewest REALTORS®. Besides leading the Metro MLS Board of Directors, Horning also is the Chairman of MARKT.

Consalvo has led ARMLS, one of the nation’s largest MLSs, since 2012. He volunteers in various MLS leadership roles and received the 2020 CMLS Peter Shuttleworth MLS Executive of the Year award.