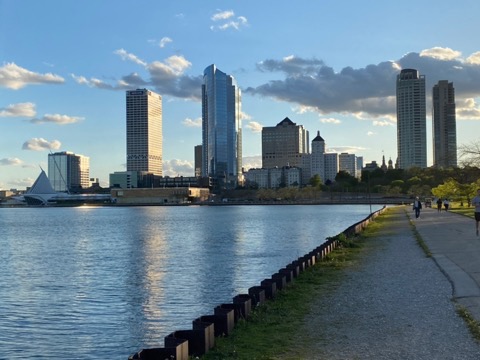 Downtown Milwaukee is bustling and thriving. In recent years, Milwaukee has seen an influx of new restaurants, bars, shops, and a variety of attractions to revitalize Wisconsin’s largest city. It also has turned into one of the “hottest real estate markets in the United States.”

More and more people are relocating to Milwaukee, which also is the fifth-largest city in the Midwest. The allure of Lake Michigan and the numerous activities that surround it are part of the attraction.

The cost of living also is affordable, which is factoring into the influx of new residents. Milwaukee ranks among the lower third of major cities to live in by cost, according to Move.org. Forbes details Milwaukee’s cost of living as 3% lower than the national average.

Young professionals moving to downtown have assisted the growth. Niche.com ranked the city as the 47th-best city in the country for young professionals in terms of jobs, housing, and entertainment opportunities.

The neighborhoods around Milwaukee are what craft the city. Trendy neighborhoods, like the Historic Third Ward, Yankee Hill, and Brewer’s Hill, are attracting young professionals. They are right near downtown, giving young adults a plethora of options for nightlife, restaurants, and retails stores.

In the summer, the city has outdoor events and festivals occurring on a nightly basis. There is the world-famous Summerfest, Jazz in the Park, and cultural festivals, like Germanfest, Polish Fest, Bastille Days, and Festa Italiana.

The sports scene also is thriving. The Milwaukee Bucks have been one of the NBA’s best teams in the last two years, while the Milwaukee Brewers have made the playoffs each of the previous two seasons.

The recently built Fiserv Forum, which is home to around 150 events each year, including the Bucks, is one venture that has spurred growth. The Bucks also have built the Deer District. It already features restaurants, shops, office space, and housing on parts of the 30 acres planned for the entertainment development.

Besides hosting basketball games, the Fiserv Forum is one of the top entertainment venues in the world, according to Pollstar. In Pollstar’s midyear rankings, the Forum was 48th in the world for ticket sales from Nov. 21, 2019, to May 20, 2020. It ranked 27th among U.S. venues, beating out arenas like the United Center in Chicago and Little Caesars Arena in Detroit.

The first year of the new arena generated over $36 million in new property values from 2018 to 2019.

The Bucks’ plan for downtown Milwaukee is in its early stages, but it already has impacted the real estate and tourism markets. In upcoming years, the Bucks plan to add a glass-paned office building of up to 20 stories, multiple hotels, and an unspecified number of high-density housing units in the area around the Forum.

Those plans are supporting Milwaukee’s growth. There also is construction occurring across the city, and housing is in high demand. Those two things are partially due to the flood of traffic brought in due to the Fiserv Forum and Deer District, according to city officials and leaders.

The addition of a world-class venue and all the other amenities Milwaukee has to offer have helped transform the city into a trendy destination for young professionals. It features plenty of successful Fortune 500 companies and a robust experience for nightlife and entertainment.

The attitude around Milwaukee is changing as growth continues to trend upward. It is a vibrant city for young professionals, and the desire for that demographic to be in the city has helped transform the real estate market.